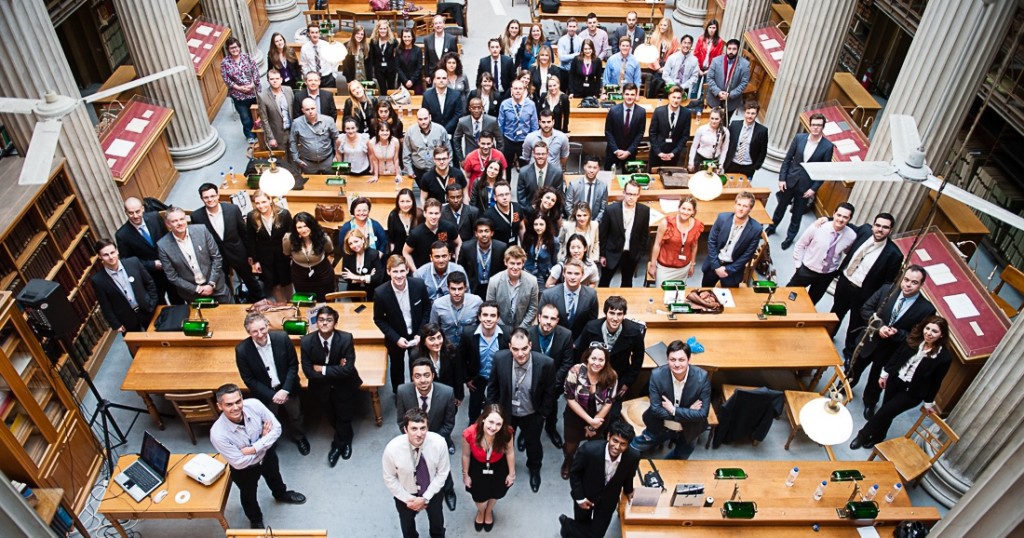 ALBA Graduate Business School organized and hosted this two day event during which the invited students had the chance to not only compete with each other but also to get a taste of the life in Athens. Team members, coaches and professors left Greece with unforgettable experiences and great memories to accompany them.

The level of the competition was extremely high and the negotiating skills of all the participants were really impressive. Participants competed in various locations all around  Athens and in different types of exercises.

The inaugural exercise was held on the American College of Greece campus and was followed by the second one – on a maritime theme- which took place on the Hellas Liberty Ship, in Piraeus. The second day started at the Bodossakis Foundation Building and the third exercise, transported teams centuries back in virtual negotiation for a peaceful solution of the Trojan War. The last exercise was held in the National Library.


For the selection of the winning team in the final at the breathtaking Acropolis Museum, TNC enlisted a group of eminent personalities from the academic and the business community. Mr. Alexander von Reden, partner in the largest law firm in Germany and staunch advocate of TNC, Professor Will Baber, from the Kyoto University in Japan, Professor Peter Kesting, from the University of Aarhus in Denmark, and from Greece Mr. Spyros Pappas, member of the Board of Management of the Athens University of Economics and Business and Mr. Nikos Sofianos, Secretary General of the Executive Committee and also a Member of the Board of Directors of the Athens Chamber of Commerce and Industry.

When Mr. Pappas, on behalf of the committee, announced the team from Iceland as the winners all celebrated this success, including the team from Leipzig, who, despite the normal disappointment enjoyed the highly prestigious second place.

To feel the positive energy, enthusiasm and passion of the world’s best student negotiators competing in The Negotiation Challenge 2013 watch the video from the competition and the negotiation between Reykjavik University and HHL Leipzig Graduate School of Management in the final.

We are still under a great impression. It was an unforgettable two days of mental challenge.
Thanks a lot, and can’t wait to participate next year.
Andrei Kolesnikov (Moscow State University Lomonosov)

TNC was an immensely enriching experience. Not only did İ make amazing friends, whom İ shall remember forever, but also got to learn a lot about the vast cultural dıversities as well as the skills of negotiating. The Angels and organizers made our stay even better. I hope to be a part of it next year too!
Varnika Chawla (National Law School of India)

The Negotiation Challenge in Athens, was an incredible experience, not only because we had the chance to discover a

beautiful city and highly experience teams, but also because we got the chance to meet people from all around the world and share a passion.
The organization of the competition was outstanding and allowed us to enjoy the discovery of new places and a different culture. This event was not only a competition, it was a once in a lifetime experience that none of us will forget.
Thank you to the organization team and to all the participating teams who made this few days unforgettable”
Aurelie Schwaller (IESEG)

This year’s TNC was impeccable! Organization, hosts, Athens, competition tasks, people… everything! It was clear that substantial effort was invested in planning and implementing. And you succeeded, in all spheres. I regret it finished so fast, but I’m grateful for precious experience I got and all new friends.
Thank you ALBA hosting team, Angels, TNC and Athens! Hope that we meet again!
Aurena Dinic (Alfa University)

Short comments from Ingvar Sverrisson student of Reykjavik University and The Great Negotiator 2013 and Dr. Remigiusz Smolinski on The Negotiation Challenge 2013 in Athens:

The Negotiation Challenge 2013 in the media:

We use cookies on our website to give you the most relevant experience by remembering your preferences and repeat visits. By clicking “Accept All”, you consent to the use of ALL the cookies. However, you may visit "Cookie Settings" to provide a controlled consent.
Cookie SettingsAccept All
Manage consent

This website uses cookies to improve your experience while you navigate through the website. Out of these, the cookies that are categorized as necessary are stored on your browser as they are essential for the working of basic functionalities of the website. We also use third-party cookies that help us analyze and understand how you use this website. These cookies will be stored in your browser only with your consent. You also have the option to opt-out of these cookies. But opting out of some of these cookies may affect your browsing experience.
Necessary Always Enabled
Necessary cookies are absolutely essential for the website to function properly. These cookies ensure basic functionalities and security features of the website, anonymously.
Functional
Functional cookies help to perform certain functionalities like sharing the content of the website on social media platforms, collect feedbacks, and other third-party features.
Performance
Performance cookies are used to understand and analyze the key performance indexes of the website which helps in delivering a better user experience for the visitors.
Analytics
Analytical cookies are used to understand how visitors interact with the website. These cookies help provide information on metrics the number of visitors, bounce rate, traffic source, etc.
Advertisement
Advertisement cookies are used to provide visitors with relevant ads and marketing campaigns. These cookies track visitors across websites and collect information to provide customized ads.
Others
Other uncategorized cookies are those that are being analyzed and have not been classified into a category as yet.
SAVE & ACCEPT